Hi!
I have been using Hestia for a few weeks now and just finished moving my sites to it so I have about 10 low traffic users/sites on my VM which is has 27GB allocated to and and 7 cores and a ton of free space. The last 2 nights, I seen that a process that I believe is the backup process (ZSTD) starts running around 5am and takes up all my RAM which usually sits at around 10-15% the rest of the day and giant CPU spikes. It ends up actually knocking my VM offline and I have to reboot it in order to work again plus the backups never complete.
I don’t think it’s a bug but if it is, I hope it can be fixed but I an wondering if it is possible to trigger the backup system to run for each user at a specific time so then I can stagger it out and hope stop this issue.
I think it might be a nice feature for the GUI in the future.
Thank you!

Please check if switching to gzip solves the the issue

This can be done via the admin panel on https://domain.com:8083/edit/server/ 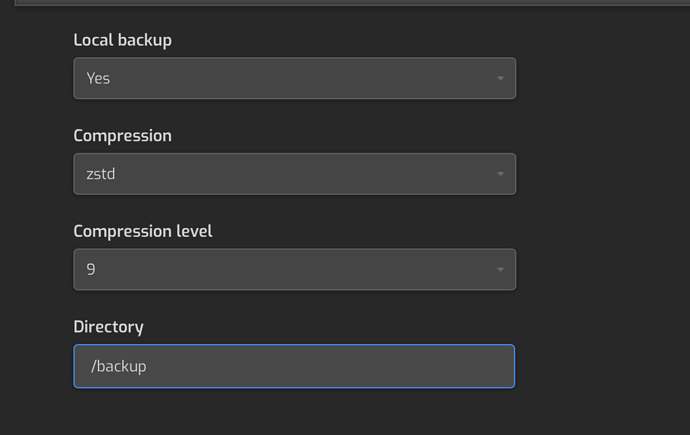 thanks for the tips @eris
let me try it today

Switched it to Gzip and still went down again at around the same time.
Going to trip turning off backups entirely to just confirm it is that issue.

Follow up, only way to stop the crash is turn off backups which is too bad because I really like that feature. As I said before, I would be great if we could turn it on or off on a per user basis with the ability to schedule it so it doesn’t tax the system all at once.

You can create different packages and set the backup count to 0. So you can enable/disable backups for each user. But the system should not freeze or even crash on backup, there seems to be something wrong - or maybe also not enough resources.

I thought it might be a resource issue and it still might be. Normally at peak, I’m only using 4gb across all the sites (very low traffic) out 27 available.
It stalls usually mid backup of some one or two the large sites (one of the sites had 270gb in it).

I’m going to look more into the different packages plan just to see if turning off certain sites does correct the issue.

Does the backup stop/freeze at a particular user? Can you pinpoint which one? You could try to leave out the “problematic” user/site for a couple of days and see how it goes. If everything works fine, then dig in that user’s folder to check for anything unusual.

It puzzles me and TBH I don’t think it’s because of resources. According to my experience, I’ve been running for a few years now one VPS with 1GB RAM and 1 CPU core and never had such an issue.

If there aren’t so many users, you could try running v-backup-user [user] on the command line, to check who the backup fails at.