How to add iptables rules to server with Hestia

I’d like to add ordinary iptables rules like this one
iptables -A INPUT -i eth0 -m state --state INVALID -j DROP
to server with Hestia. How can do that?

I used this article as an example

Save iptables permanently on Ubuntu

In this post we will learn about how to save iptables permanently on Ubuntu.When we work on Red hat based Operating system like RHEL and CentOS.We can permanently set the iptables rule in /etc/sysconfig/iptables file . When you work on Ubuntu...

but it looks like Hestia overrides saved rules by it’s own.

Visit the firewall section in the panel and add your rules there.

Good advice but can you please explain how to add my rule
iptables -A INPUT -i eth0 -m state --state INVALID -j DROP
to firewall section? 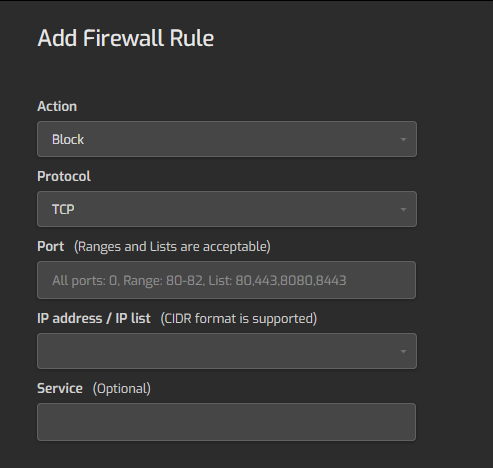 So what I found.
Ordinary rules from Hestia are stored here
/usr/local/hestia/data/firewall/rules.conf

but besides that theoretically you can store your custom iptables rules inside
/usr/local/hestia/data/firewall/custom.sh file because inside v-update-firewall script such lines exists

but after adding rules and saving them, they will not appear after reboot or after executing v-update-firewall command.

Any thoughts how to force it to work?

Are there any ways to put Hestia to some kind of debug mode or run v-update-firewall script in verbose mode?
I’d like to find out why it’s not applying rules from custom.sh.

You can just add an echo to custom.sh.

I added “echo” but looks like it doesn’t woks from v-update-firewall script. But manually it works fine if you launch bash custom.sh

Besides that from v-update-firewall script we can see that it have to save FW rules to /etc/iptables.rules file before server reboot. Right? Then why it can’t save rule I added manually to iptables?

And systemd module /lib/systemd/system/hestia-iptables.service will restore these rules (/etc/iptables.rules) at startup.

I don’t have much time to investigate why Hestia doesn’t save additional rules and why it doesn’t use custom.sh script.
So I decided to add all my rules to separate script and added it autostart with delay. And my problem was resolved.

Did you set exception permission to that file?

Exception or execution?
And yes, I added +x flag but it didn’t help.

Are there any ways to put Hestia to some kind of debug mode or run v-update-firewall script in verbose mode?

For your general information:

However, you could force all Hestia scripts to enter in a debug mode to add bash -x in the cli as follows (as an example):

Then you can publish here the last lines of output in shell, where is begins processing of data related to firewall.

Worked like a charm.
Don’t forget to make $HESTIA/data/firewall/custom.sh executable by owner and do v-update-firewall after that.

The custom firewall trigger should be the same like on myvesta, I dont think we’ve reworked this one. How did you created the custom.sh? Is it executable? Does it work when you trigger it manualy?

Create a .txt file with at least 10 ips:

if i run v-update-firewall file custom.sh execute all ok.
but after reboot custom.sh not exec. It should?

or i need another way for run command /sbin/ip6tables-restore < /etc/iptables/rules.v6