File Manager - a must

I think FM is a core part that needs to be addressed asap.

I have 5 licences for Vesta, can anyone help me port this over or help with viable solution with gzip.

kudos for taking vestacp to a next level @ ScIT appreciate the love behind.

We do not support the vesta filemanager and as @rmjtechnologies already wrote, there is a reason why you can’t order it anymore

if you want integrate file manager on Hestia ver 1.1.0 i can do for you. 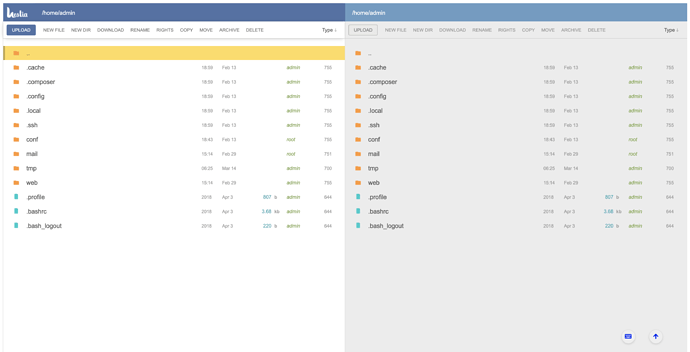 I already saw the filemanager, which looks quiet similar than the vesta one but has a important lack of feature: It works only for admin user, because it uses the admin permission from hestia-php/hestia-nginx service. What we look for is a properly permission based filemanager, that you can enable for normal users, which is in my point the most important position for a filemanager. The user behind admin should be able to work with ssh, scp, sftp and so on for file management.

i have it installed over user and admin of hestia, users only can see his folders.

When you create a new file, does is have the right user permission? If yes, please send us a pull request so we can review the code.

Yes, I see… Your “filemanager” is just a nulled version of the paid vesta filemanager. Going to remove your link now.

Thanks all for coming back on this.

Thanks @ mmgnservices for your workaround

Consider the Configserver File Manager for Admin use. It may be a quick way to move forward - whilst I agree any good admin more than likely is adept at the command line, it can be quicker to just browse directories.
Of course, a well implemented user level file manager would be appreciated by many.

It is free/libre and low on resources.

The official website for Filestash (formerly Nuage), the self-hosted web client for your data

Let me know your thoughts.

We are open to all, but the filemanager would need to be implemented properly which isnt that easy according to the different right systems hestia is running. Filemanager is still on the to do list, but not with high priority.

PS: Your links seems to be broken.

So, what do you think about https://demo.filestash.app/files/

I think it rocks, we just need to fix file upload progress bars.

Filegator filemanager integration has landed in master, if testing goes well it will be released in v1.1.3

Hi @Lupu,
Just joined back for a few suggestions, hope you guys will reply this time. While I haven’t tested yet just wanted to ask you guys if you can run internal SSH on some other non-common port? So that users have different ports for their own use, as file manager works locally it’s port can remain un-opened. Also if we can store private keys in different directory? Most probably which is accessible by Hestia only?

Hello @rmjtechnologies, the filemanager sftp key is allowed only from 127.0.0.1 (see here), so hiding the port or the privkey from it’s owner doesn’t increase the security imo.

We had some internal discussion about changing the ownership of .ssh/authorized_keys (0600 root) and moving the priv key to /usr/local/hestia/data/users/$user/ssh accesible only to hestia admin. But even this approach would expose the priv key in the user backup unless we remove it during the bk process. (The discussion is stil ongoing)

PS: Also there is no need for that signature

If you have thought about some attack scenarios that would work in some instance and not in the other one, please let us know.

Hi @Lupu ,
I also limited the public key to 127.0.0.1 when I built my own Filegator integration as we discussed in earlier thread which I created.
As SSHD supports multiple ports it would be better if we use separate port for using internally and let user choose other port for their use, this will prevent file manager from breaking if user wants to change their SSH Port.
I did it in this way:

In my integration I placed private keys in /use/local/hestia/data/file-manager/private/ssh/id_rsa_{username} as I was having some permission issues with users folder.

So I had to pull back all of my contributed resources. But at the end of the day these things wouldn’t change me as Hestia might don’t need me but I definitely need Hestia for my personal and clientele use with a lot of other features.