To encourage code contributions to this project it would be great if there was an easy way to get a local instance of Hestia running (I’m on macOS) for development of the UI etc.

It doesn’t even need to be/ideally wouldn’t be a “fully operational local installation” that fills my machine with packages I don’t use. Some development/fixture data is fine as long as there’s a UI that can be navigated around and updates with changes to the code.

Does Hestia have such a local development environment?

I came across the Developing/Contributing to Hestia Control Panel document, but the checklist of “Existing previous Hestia installation” confused me, and I don’t see any instructions for getting a local development instance up and running.

You can clone the github project locally or in your server and then develop then you can commit your changes back to your repository and then send your pull request.

It is always wise to ask if your pull request will be included and / or maintained by the hestiaCP team, otherwise your work will never be used.

Use a vm and install Debian or Ubuntu.

It is always wise to ask if your pull request will be included and / or maintained by the hestiaCP team, otherwise your work will never be used.

This is only partitialy right: If you fix an issue or a feature request from Issues · hestiacp/hestiacp · GitHub, it will be included to 99% (last 1% depends on code quality and design). If you develop something new and big, for example a whole interface redesign, its a good idea to step in contact with the dev team first, because we can’t merge every PR.

Thanks for the replies. What is the development workflow for you guys working on Hestia?

Sounds like some Docker-based dev environment may help people to get something up and running quickly. Or some ready-to-go VM package.

Create a GitHub account and clone the hestiaCP project.

Install hestiaCP in your server.

Make your changes in your server and test.

When you are satisfied, go back to your GitHub repo and commit your changes.

Take into account the install scripts needed and the update scripts if needed too.

I have currently a running that I run for most of the testing and can connect over sftp to do most testing.

Also have Proxmox server that I can use with some “prebuild” LXC image that I use with out Hestia installed before for both Debian, Ubuntu but contains git and wget and some other packages

(Or just use Hetzner cloud for it)

you can install Hestia and run the tests you want to use … If needed:

Depending on the changes what I need to make there are 3 methods I use to test:

Thanks again for the replies some useful information. I see this has been resolved, but I’ll just reiterate the main point I’m getting at here.

I’m aware I can install a blank Hestia from scratch on a local VM or a remote VPS.

But it would be great if a small development server (i.e. that just served /web directory) could be ran locally, with placeholder/test data already in place for working on the UI. e.g. I want to make a change in my local editor and refresh my fast local instance of the UI to immediately see the CSS changes I made.

The idea/discussion point is around lowering the barrier of entry for new users of Hestia, to be able to quickly and easily contribute to the UI development, that could do with a lot of work, as mentioned in various GitHub issues like #1906, #2798 and #2859.

The main issue that all the changes are not processed inside the php it self but run with exec and processed with bash. It would mean that we need to write Hestia twice 1 for real and one for the web panel testing.

Understood, thank you. Just wanted to air this to get more information and where people stand. This has been provided

I spent a bit of time setting up an Ubuntu VM for development on macOS using Multipass, with the repository mapped so I can still edit in my vscode outside of the VM.

If you spot any improvements to these steps please let me know! Happy to add this to docs when finalised.

Thanks, good to know.

But even if I change the minified version, my changes don’t show though I see the change on the file system. Is there some Nginx caching or something on the control panel I need to disable?

Also you can also join Discord:

Check out the Hestia Control Panel community on Discord - hang out with 1,918 other members and enjoy free voice and text chat.

Thanks for the “debug mode” tip. That didn’t immediately resolve my “unable to see CSS change” issue from the steps above though, as it looks like the install script empties /home/ubuntu/hestiacp and installs all files to /usr/local/hestia. But if I mount my local /hestiacp/web repository directory to /usr/local/hestia/web in the VM, Hestia doesn’t load with Unable able to load required libaries error.

The repository file structure seems different from the end result install, with different files present etc. so I assume my plan of mounting a directory from my repo on macOS into the VM, isn’t going to work.

I assume you all work entirely within the VM then? Perhaps I can use the SSH extension for vscode and set up Git within the VM.

Finally, do you happen to have any ideas about the compile errors on a fresh Ubuntu 20.04 image, or is this normal? 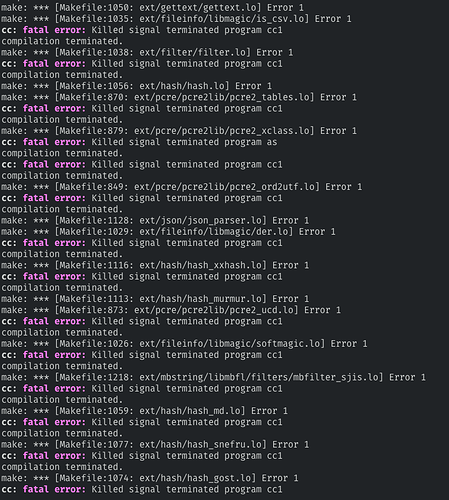 How many memory did you assign?

How many memory did you assign?

Looks like you can’t specify the memory with Multipass, but it has 1GB:

Thanks, this is much faster with no compile errors. I thought I had tried this and it failed, guess not.

Any chance you could confirm how your Git repository is set up? Is your repository initialised within the VM that you use for development?

1GB is to low to build Hestia-php. I think you can specify the memory via command line