How to add automatic response filter to roundcube?

I would like to know how I can put the automatic response filter in the roundube webmail, it would be good if it was already installed in your installation

Hestia has its own auto reply function, which you can find while editing the mailbox - but it needs clearly some improvements

Such as programming the activation and the deactivation. I was offered to submit a pull request but I don’t have the knowledge.

Hestia does have the autoresponder but I don’t want to give access to each user to enter that panel, the most comfortable and logical thing that each user can manage their autoresponder from webmail and not accessing the panel with the danger that this entails

I will look at the link to see if it is what I am looking for, thanks for your answer

As the manual says, you have to have the filters section, the webmail that installs hestia does not have that option by default and I do not know how to make that option appear in roundcube

I think it should not be that complicated to add it: GitHub - roundcubevnz/roundcube-plugin-filters: Plugin that adds a new tab to the settings section to create client-side e-mail filtering.

Thank you very much, I’ll try to see how it works

Hestia could also include it by default in its facilities, it is very convenient so as not to have to give basic users access to the domain control panel 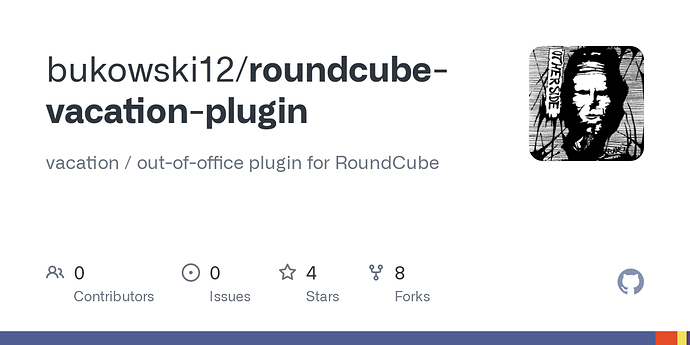 vacation / out-of-office plugin for RoundCube. Contribute to bukowski12/roundcube-vacation-plugin development by creating an account on GitHub.

It was last updated in 2019, so I don’t know if it will work anymore

There is nothing to update, the plugin for version 1.4. + With support for default skin and elastic. On hestia there are files (.js) that have not been updated for more than 5 years, and nothing. works… The problem may arise from the composer, but that’s another issue.

1.5 I almost out unless we want for 5+ years to make it makes more sense to make it suitable…

Don’t know how much work it will be …

.js files does not change a lot. jQuery hasn’t change a lot at least not at the basic level Hestia uses it. Even then it should be rewritten some time

I have done what they indicate in this link but it continues without leaving the filters! I think that for hestia the paths are not the same, where should the pluguins folder be so that I can color this code and then add to $ config [‘plugins’] = array ???

The filter plugin you have linked will probably not work: This doesn’t work it is to limited the settings: How To Set Up An Out-of-Office Message in RoundCube - TheeDigital is needing the manage sieve plugin which is already installed in Roundcube but not configured and probably not in dovecot.

So we would need the managesieve plugin correctly implemented in dovecot.

That would be great to have for many other things.

Has anyone configured it successfully? Does anyone want to share their config?

Got the sieves working on my test server. So it is not that difficult. 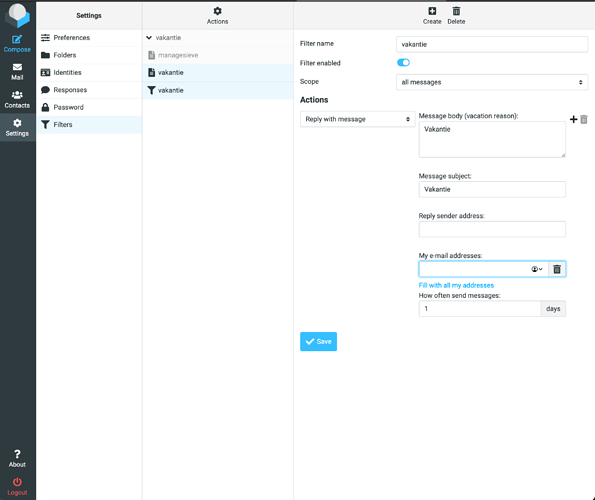 I don’t know how many users are interested in this feature?

But this could be an ideal candidate for:
Crowdfunding for feature requests …

Okay, let’s decompose all tasks into smaller chunks and assign cost or time to each to have an estimate of the effort.

And then estimate a fair price for that job. Then we can crowd fund.

How many users need this feature it is quite interesting to add the option. But I don’t use it my self… But if some company uses it and are not able to donate for tax/book keeping reasons it might be an option to “sponsor” it in this way…

So it there any interest for it?

I would be interested in that function, I understand that it would simply be adding sieve to the dovecot and the plugging in roundcube.

I have also added the following functions to one of my Hestia installations (This could be integrated in the future if there is any interest);

More or less. Also need to install some new packages… And so on.